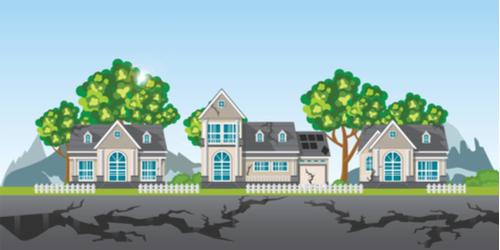 Geopathic stress is an extension of a theory that proposes everything on earth is part of an energy field.

If you can imagine, an empty bathtub representing the earth. Fill it up to the top with water. The water in the bathtub represents everything that exists within the world. People, plants, water, air, fire, rocks, lava, love, hate, etc. It’s all water within the tub.

Now imagine that body of water is pure energy - one completely connected body of energy, held together by millions and millions of precise particle vibrations. When undisturbed, the water in the tub remains calm on the surface.

However, geopathic stress would be represented by areas within the tub where the water is not at rest or disrupting the stable frequency. The frequency is disturbed by something continually moving or resonating at an irregular vibration.

Real World Examples Of Geopathic Stress:
Geological fault lines
Underground water veins and waterways
Disturbances of the natural geomagnetic field
Concentrated Mineral Deposits
Bathtub Water Example Of Geopathic Stress Explained:
So, we have this calm body of water and something below the surface disturbs the water. What happens? The disturbance will rise to the top of the water and make waves. These waves are the after effect that we feel on the surface. In this case we will use the example of a geological fault line.
A geological fault line is an area of the earth’s structure, usually rock, where there is a fracture or crack. The crack breaks the continuity of the structure and due to the resonance/vibration of the earth, the two fractured pieces will rub against each other causing friction. This friction can be minor or in some cases major, much like a resulting earthquake.
Geopathic Stress and Earthquakes
Not all geopathic stress will be enough to trigger an earthquake. Earthquakes and volcanoes are among the most extreme examples of geopathic stress. But it’s unlikely that only major fault lines exist. There are likely many instances in the earth’s makeup where stress has caused similar issue(s). There are likely millions of little cracks and disturbances causing smaller amounts of friction that we feel the after effects of, but to a lesser degree.
Geopathic Stress and Underground Waterways
In the case of underground waterways and water veins we will use the following example. Science tells us the earth is not completely solid throughout its structure. There are caverns, sinkholes, pits, mineral deposits, etc. Water flows through the earth in various places naturally. Water will also flow wherever it can go including new areas it has never been. This can build up pressure and cause stress within the earth in places where water has not flown before. It can freeze and fluctuate with atmospheric pressure, which again, causes stress. Imagine a balloon filled at 50% capacity with water. If you were to then coat the balloon with wet mud and wait for it to dry, you would have a model of an aquifer- a natural pool of water underground. If we slowly add more water to the balloon, the dried mud will be forced to expand, effectively causing little cracks all over the structure.
How Geopathic Stress Affects The Body
Geopathic stress has been suspected to be a common factor with many illnesses and psychological conditions. It’s usually associated with illnesses related to a compromised immune system. This is likely because we are walking bodies of resonating energy. We, much like the earth and everything around us, have vibrating particles that hold us together. In order for our bodies to work properly, everything must function as it was designed to do. This is called homeostasis.
Here is where it gets interesting. Going back to the earlier stated theory that all energy is connected, that means we can feel the effects of all other moving particles around us. This is exactly why geopathic stress is believed to affect the health and immune system of humans and other living beings. The irregular vibrations interrupt the homeostasis (regular function) and prohibit the body’s ability to fight off pathogens and invaders.
Geopathic Stress Metaphor In Music:
Think of the last time you were at a music concert. What makes music enjoyable and pleasing to the ear is all of the instruments working together. 99% of the time that means the instruments are in tune and playing a piece of music that was written/organized in a very specific key signature, with specific rhythm dictation. It is the interplay between all the instruments and their subsequent vibrations that are related to each other coming together to create one homogeneous sound.
Now imagine what would happen if someone came on stage with the musicians and introduced a new sound that was not part of the original composition. For example, if someone were to bring their motorcycle and rev the engine loudly into a microphone. Three things would happen immediately.
1. The musicians’ ability to hear each other would be disrupted, thus causing intermittent breaks in the continuity of the instruments harmonizing together while the musicians struggled to keep the function of the (music) together.
2. This would then interrupt your ability as a listener to precisely interpret what was being performed on stage, most likely leading to confusion.
3. The listener would then be unable to fully carry out the task of hearing the music which was designed to generate an emotional response.
In the above example:
• The musicians are the vibrating cells’ homeostatic frequencies in your body.
• The homogeneous sound (music) is the homeostatic frequencies keeping your immune system functioning as meant to be – thus creating a beautiful intended emotional effect. (Life)
• The sound of the motorcycle is the Geopathic Stress - interrupting frequency - working against the harmony and causing dysfunction.
For more information on Geopathic Stress, we recommend the following documentary:
https://www.youtube.com/watch?v=1Wprr9TYUwo
Sources:
https://www.electricsense.com/14420/geopathic-stress-danger/
https://www.lifeenergysolutions.com/geopathic-stress/

Disclaimer
These statements have not been evaluated by the Food and Drug Administration.
These products are not intended to diagnose, treat, cure or prevent any disease.
If you have or suspect you have a specific condition or disease,
please contact your healthcare provider.